Another busy week has passed, with a great new discovery, an impromptu gig and a planned show under our belt.

Last Tuesday at the Linsmore, I got to see and hear the very charming Moscow Apartment perform, featuring Brighid Fry and Pascale Padilla. Combining beautiful and youthful harmonies, spare but tasteful guitar work, and quirky lyrics, this duo seems destined for great things. Their bios speak to a lot of musical experience even if the bar scene may be new to them. Each had unique qualities to their voices (Pascale reminding me a bit of Feist, while Brighid of friend Mary Stewart), and playing styles that blended to create a greater-than-sum of the parts. They were a delight and I wish them well!

Here they are performing “Annie”

After Moscow Apartment finished their set, host and multy-threat talent Drew Chale played an extended set. At first, I assumed that was part of the plan, but by the time 10:00 rolled around, it became evident that the second and third act had not shown up, for reasons unknown still. As I was considering heading home, Drew collared me to play a half a dozen impromptu songs, followed by Gary Edward Allen. It turned out to be a fun, and cheap night out! Thanks to Mary Gilbert and the club for the honorarium!

Thursday night was the date for my first time at the Eton House, with Elana Harte and M. E Law. I was looking forward to this show, but the weather and the Stanley Cup semi-finals conspired against us, so we had a spree, albeit appreciative crowd, and each other. Elana blew me away as usual with the quality and power of her voice, and Marion, no slouch in the voice department, resonated for me in the sometimes pointed but still humorous observations she made, something I strive to do in some of my songs too.

Here I am with Marion and the infamous Michigan J. Frog tie. 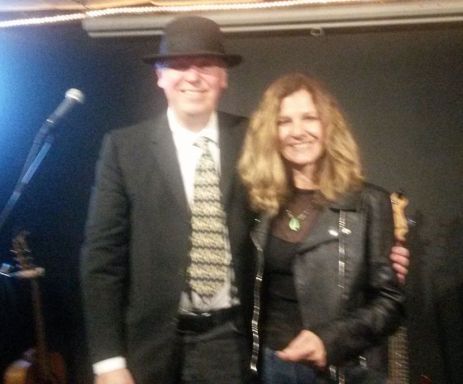 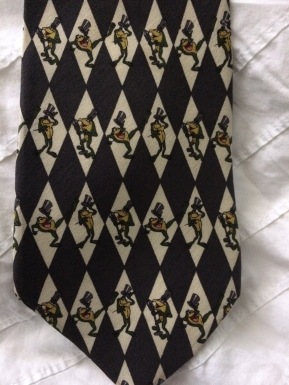 Which finally brings me to the topic in the title, by which I mean writing songs that talk about people. It’s been alluded to in this post that some of my songs can be ranty. I accept that, and that some songs are more finessed at it than other. There is a certain cathartic quality to getting this stuff off my chest, but there are also inherent risks, such as causing considerable offence. See, it’s one thing to pick on celebrities such as in a song I wrote called “In These Times We Live In“, which I hope to remix and upload soon, it’s quite another to point the finger at someone “ordinary”; it could easily degenerate into holding that person to ridicule. Not good for anyone. Some songs have accomplished that delicate task by making the specific more general, and disguising enough the identity of the targeted person, or making the character in the song an amalgam of more than one person. Carly Simon’s “You’re So Vain” is a great example.

I have tried to keep in mind with these types of songs, like “The Queen is Dead“, and the newest “Loud Girl“. I try to be guided by the idea that observed events should be reported in as a non-judgmental way as possible, that the context was very public, and that in the end, the listener should hopefully feel that the song did not harshly deride a specific known person. And it must rhyme.

On the other hand, it may also be a question of how egregious the behaviour was. Tough call.

I have included a rough demo of Loud Girl below. Let me know if you think I am sticking to my own guidelines, particularly if you were there when the events it describes occurred. I say no more.

Verse 1:
I love the loud girl
The not-too-proud girl
The flouncy bouncy
All in white girl
Perched high upon the ledge
Dancing too near the edge
She beckons for attention
Lacking all circumspection

Chorus:
She whistles too loud in my ear
And makes the sound I don’t want to hear
She may not like what I would say
Then she’ll stand up, and simply walk away

Verse 2:
She is the wild girl
The fun-inside girl
Dancing and prancing
In her happy world
Plié and arabesque
In her mind’s discotheque
Twerking to get a rise
Skirt hiked up to her thighs

Verse 3:
Now she’s the gone girl
The Cinnabon girl
The steamy creamy
All too much girl
Was it wrong if I stared?
If I did had she cared?
Is it for me to measure?
She dances for her pleasure

One thought on “About People”