Today’s blog will be brief as there is lots to do in other areas of my life.

ManCave Studio is in the midst of a rearrangement to make it better for mixing. I hope to be done for next week and post a few pictures. I’ve also added a ribbon mic (an ART AR5) and acoustic room correction hardware/software (the IK Multimedia ARC 2.5 system) to the toolbox so I hope to hear improved results.

As mentioned in previous posts, I have begun recording demos for other artists in the Cave. I also hope to start the long-deferred re-recording of FatCats songs for an eventual album release. I am open to advice and suggestions for any aspect of tracking. mixing and overall production. More on that as things develop.

The missus and I had the pleasure of attending a birthday celebration for a friend of ours last night at U of T’s Hart House. It’s a gorgeous building and was a great setting for the bash, which included a live performance by ABC Songcircle alumnus, former The Nerve bandmate and journalist David Israelson, along with all three talented kids and wife Susan, whose birthday it was, on the drums. I think David has been reading up on my uncle George.

This past Tuesday was such a good show for such a small attentive audience. The occasional low turnout for the songcircle fortunately does not seem to faze those on stage having lots of fun. If you have seen the show, we’d appreciate you helping us get the word out. Thanks to m.e. law, Don Stevenson and Sarah Siddiqui for gracing the stage, and to friends who made it down.

This week, #34 is a VERY SPECIAL ALL-BAND edition, where we will have the entire Marwills on stage performing songs from their latest album and their solid hits, maybe some more obscure material, and talking about the special synergy that comes from composing in a band context. It will be a remarkable show! For bios, just click here.

If you happen to be on the Esplanade on Tuesday evening, you should hear us, so come on in to the Amsterdam Bicycle Club! If not, it will be worth the trip down.

I hope to see you there. Be well!

Thanks for sticking with this little journey through album release land. I hope everyone is either enjoying a fabulous Father’s Day and/or being nice to your dad, which reminds me I need to call mine right after this is posted…

This final instalment is about mon ami Kyris, who was a guest at a recent and très spécial ABC Songcircle all en français. Kyris has just released Nous (meaning Us, or We, depending of context). The single and show finale, Le coeur du monde has just been released The setting was the Burdock, a lovely club in the west end with an excellent sound system and attentive technician. An enthusiastic crowd of francophones and francophiles showed up for a very strong and tight performance. 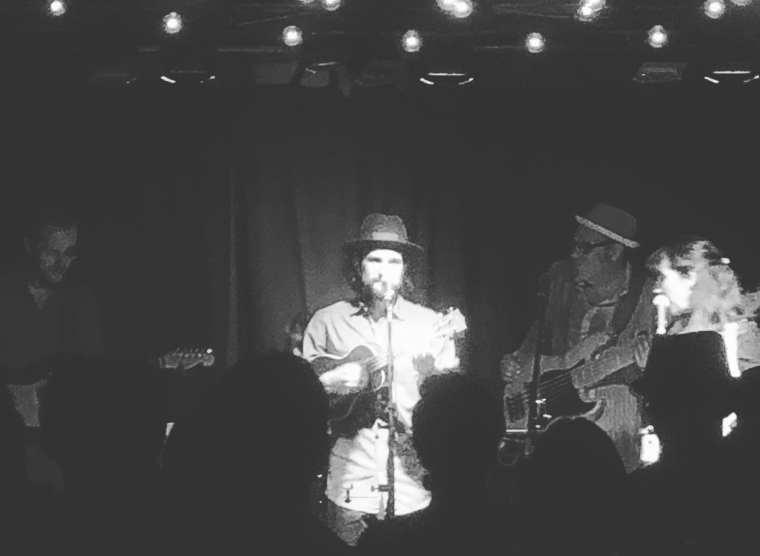 There were a lot of laughs and great stories last night at the #31 Songwriters’ Circle last Tuesday. Super thanks to Dean McKinnon , Salabama (aka Sal Indigo, aka Sal de Bain) and Robert Hyde for great songs, playing along and company!

I’m looking forward to this show and hope you can be there too! Be well!

This week, in the second phase of a three-week album launch run, I got two for one as two past ABC Songwriters’ Circle guests were on stage at the same time.

Lead singer and octave mandolinist Kayt Lucas (show #24) was supported by a first rate band which includes another more recent ABC SWC alumnus, Michael Menegon (show #29) as well as featured guests guests. Kayt and the boys performed songs from their new album The Company of Kings for an appreciative audience. Kayt was ready and focused for the show, in excellent voice and fashionably attired.

This  coming Friday, June 15 for my third and final album release attendance, it’s Kyris‘ turn (show #28) for a Francovaganza at the Burdock, for his release of Nous. J’y suis!

This past Tuesday was a hoot with Matthew Runaway, Soozi Schlanger and Hurricane Mike Thompson. This week promises just a much fun with Toronto based musician and songwriter Lefty (aka Rob Hyde) will answer the question as to his nickname as he plays right-handed. Golden-voiced Dean McKinnon will reveal why David Macmichael wrote a song about him. Salabama aka Sal Indigo will regale us with tales of his southern sojourn this winter. For bios, just click here!

That’s it for this week. Be well!

And so it begins.

As mentioned last week, there are three CD release events on three consecutive Fridays in June from three past ABC Songwriters’ Circle guests. I have committed to attending all of them and reporting back.

This past Friday was Just Jillian‘s event at the Paddock Tavern for the release of her 9-song album What Day Is It—great title by the way. Jillian was accompanied by stalwart friend and musical partner Carmen Toth on keyboard and vocals, with Aaron Comeau on bass, Kyle Sullivan on drums and Andrew Barker on lead guitar, the same core group that played on her EP. It was a solidly tight show, and Jillian was in great form, and warmly received. Here is a link to the album that evening.

This coming week, it’s on to the Dakota Tavern for Kayt Lucas and Hard Folk for their release of The Company of Kings.

This week (June 5, 2018) at the ABC, a a very special “country” night, or as close as we can get. My guests will be authentic small town farm boy Matthew Runaway, song-painter Soozi Schlanger, well-known for the Zydeco faves Swamperella, and multi-instrumentalist “Hurricane” Mike Thompson. Yeehaw!