This week, another song exposed: The Tilley Song – yes, needing a better title.

This one can be grouped in my “novelty” song collection, and may have a limited shelf life, depending on how long Tilley Endurables stick around. For those who don’t know what Tilley is, the company is a Canadian manufacturer of travel clothing, kind of like MEC but aimed at a different demographic. They became famous first for the hat (still outlined in their logo), then for vests worn by pro photographers around the world.

Let’s be clear: there’s nothing wrong with the clothes. It’s superbly made and lasts forever. The song is more about the impression made on us when Mrs. Félix and I visited the store a few years ago to look for travel ear for an upcoming holiday. “This store is full of old people!” we thought… yup, pot calling the kettle black. And perhaps also the strong impression that despite the “going on a safari” look, it was likely that many wearers may not subject themselves to any severe discomfort. Myself included.

Still, inspiration “goes with anywhere” as Tilley’s slogan goes, and I set to writing this simple 12-bar rock ‘n’ roll song. The lyrics are below, with some minor changes from the demo, as I continue to tweak the song. Note the links in the verses, which explain their provenance.

The Tilley Song — ©2014 R. Pelletier/Félix and the Cats
Verse 1
It’s not receding hair
Or whiskers sprouting everywhere
It’s not the saggy butt
Or life stuck in a rut
A truer sign of aging
Could not be any clearer
You know it’s true

And it’s not pretty

Chorus
I shop at Tilley’s

Yeah, I shop at Tilley’s

Verse 3
Despite what you’ve been told I did not die, and I got old
I take my medication
Like my g-g-generation
I celebrate the fact
An elephant can eat my hat
And when it is ejected
It comes out unaffected

The next best thing to playing is to see other musicians play, particularly if they’re superbly talented like those I saw this past Thursday at the Junction City Music Hall in the west end.

The first act on was Chelsea Reed, a recent Australian immigrate starting to make a name for herself here in Toronto. I have seen her perform a few times, and am always struck but t
he great harmonic subtexture she provides on piano for her smooth singing. There is a engaging depth to her lyrics as well, a great pop sensibility and a candour that make it a joy to watch and listen to her. One of my new favourites!

Here is a snippet of one of the songs, I Want the World. I invite you to go to her Facebook page linked above  and check out some more. She should have a new album out soon as well, so look out for that. And see her live too!

Also on the bill were the Danger Bees, another solidly rocking band originally from Dartmouth, fronted by someone who I have mentioned before, the gifted David Macmichael — singer, songwriter, cyclist and cohost of Relish’s night Stir It Up Sunday.

I love these guys’ energy and humour. The guitarists work superbly together, Josh Gillard holding down rhythm while injecting just the right sharply phrased counterpoint to Matt Leitch‘s intense riffing, all the while dancing all over the pedalboard. Marky Beats, who also played with Chelsea had a chance to really cut loose, while Will Meadows kept the bottom melodically tight. I may do a special feature on Will another time: the kid has chops and range. Here they are playing Plenty of Fish from their first album Wyatt.

Finally, those who follow me on Facebook may have already read about the upcoming shows. For any who haven’t, they will take place at the Amsterdam Bicycle Club on Esplanade, Saturday September 10 and again Saturday October 29. Start time is a bit late for some (10:30-ish), but well worth it as the venue is fabulous. So I hope you will make it, maybe have dinner there (The Old Spaghetti Factory) or nearby if you prefer, and you could catch a set or two… or three for the die-hards?

Indulge me in this metaphor, the musical journey.

As much as it is a journey of self-discovery, there are are also many opportunities to meet and learn from fellow travellers. This week’s blog will talk of two, but there are more that I hope to get to later.

Tom Rich is a talented writer, singer and multi-instrumentalist who has been in Toronto for a few years, and a frequent player at the Relish open mic. He has worked with a number of artists including Sam Taylor and Jonathan Roy, as well as performing on his own and with band performing his terrific original material. His latest CD is available from iTunes here.

Sadly, Tom is returning to Halifax soon, but not without a farewell show, the details of which are below. Consider yourselves encouraged to attend.

My dear Toronto kinfolk.
After two-and-a-half years of living part-time in The Big Smoke, I’ve made countless new friends and unforgettable musical memories, got to know your city and fell head-over-heels in love with it. I loved it so much, I made repeated plans to move there permanently but alas, after heavy consideration, my heart longs to reside by the ocean in Nova Scotia. I have a job to do at home that I cannot trade for anything – my duty to my brother Colin as his personal care assistant. Colin has a rare condition called metachromatic leukodystrophy, and I’ve been assisting in his care ever since his diagnosis in the early 1990’s. In my time away from him, I’ve realized that there’s nothing else to which I would rather devote myself.
I will remain active in the music scene at home in Halifax. I’m going to record a new album over the winter; of songs inspired by and written during my travels between Hali & The Tdot (which have also led me twice to Nashville). I am also involved in some exciting new projects from Matthew Pickup, Dark Lit Sky, and will release The Dang Danglers’ Self-Entitled Debut, a side-project album I recorded in my trailer home with M Pickup and my brother Luke.
I will never be able to stay away for too long, but I am going to say so long for now, by playing a two-hour solo acoustic show at Relish Bar & Grill in the east end of town, on Thursday August 25 at Relish On The Danforth. It’s an early show, with Karaoke to follow, so of course that means plenty of time afterward to delve into the vast selection of fine Ontario craft brews and let loose.
So come on out and let me thank you in person.
– Tom Rich 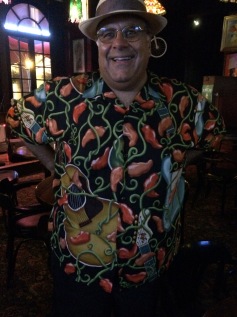 Another friend made along the way is Sal Borg aka, Johnny Blue, and other aliases as the mood suits him! Sal is not only a great performer, he is a living encyclopedia of the blues and vintage gear.

Below is a video of him performing a great cover of Johnny Winter‘s Mean Town Blues, recorded August 13, 2016 at The Amsterdam Bicycle Club.

Sal’s originals cover an interesting range of topics, including food, a subject that he can speak to with great authority as his family was in the wholesale produce business for a century. One of my favourites is Hot Sauce On Everything, a snippet of which is below.

Sal’s lifelong fascination (his kids confirm that) for  music and musical instruments have led him to own one of the most impressive personal collections of guitars and amps I have ever seen, short of rock stars’ warehouse-full accumulations. Every item has a story behind it, which he gladly shares. Time passes pleasantly and quickly in his company.

Sal kindly showed up for my gig this past Friday at Relish. He had the chance to hear this number, Looking for the In-Between. The vocals are a bit under-mixed, but listen to Nemo and Greg tear it up on bass and drums! I had a hard time staying focused when either would do something downright awesome. Here it is below.

I am currently out of Toronto to visit my Papa in Québec and catch up with long ignored relatives, but will be back to prep for my return to Relish Bar and Grill this coming Friday, August 12 at 9:30. I hope to see lots of friendly faces out for this show as the venue is awesome (excellent food and drink)!

All this francophonie made me reflect that, despite a French upbringing, my répertoire includes only one song in my native tongue. Dommage.

So, until another one comes along, here is the story behind Hé! Que la vie est dûre! (Isn’t life hard, heh! — roughly translated). There will not be naming of names in this one, but it is based on a real person, but I hope the situation is sufficiently univeral to appeal to all.

It is about the kind of person that comes back into life, seeminly helpless and needing support. The caring and concern ends up rewarded by lies and betrayal, leaving the benefactor empty-handed. Of course, this is not the first time such a letdown has occured. The song is a cathartic response to that; it is not an endorsement for lack of sympathy.

The issue that complicates theproblem and can often make one feel guilty for having the feelings of resentment expressed in the song is mental illness. Anyone who has had to deal with an afflicted person will understand.

So, I would like my next French song to have a more upbeat message. Maybe family reunions or pretty French girls, if Mrs. Félix is okay with that.