I have kept my head down and my nose to the grindstone this week as, although I am officially retired, I take on occasional work to help with expenses, like the new (used) car recently purchased and mentioned in last week’s blog.

So, with that theme in mind, here’s another demo celebrating everyone with a day job.

Things Will Be Alright ©2010 R. Pelletier/Félix & the Cats

Bridge
Do you feel the world
Heavy on your back?
Do you wish it would
Cut you some more slack?
It can always wait
Until you get back
Things will be alright

So on that note, don’t work too hard, and enjoy life! I fervently hope that might include stopping by the Amsterdam Bicycle Club for another special Songwriters’ Circle evening of song with guests Michael Butcher, Neil MacNaughton and Chloe Watkinson. 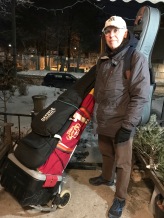 After six years of relying on public transport and car sharing services, I am back to owning a vehicle. This was brought about by a sudden opportunity and a realization that with more gigs for me, and garden visits for the lovely Mrs. FatC, we had reached a point where it once again made sense. The picture on the left shows the alternative: on the cart is the gear hauled down by TTC to the Amsterdam for shows every Tuesday: acoustic guitar, electric guitar, bass, mic stand and such, cables, mics, various connection boxes. Note no amps.

Despite the new wheels, I have still relied a lot on TTC for getting around, particularly as this past weekend was Winterfolk. This was my first year attending and I caught a few acts, but missed some people as a noise complaint shut down shows at Terry O’s, one of the venues for the festival. The schedule was shuffled but quite a few performers seemed to have simply been unable to perform, at least as best I could tell. I hope this can be sorted out for next year. To my ears, the volume was quite reasonable especially as it is essentially a folk music festival, and I find it shocking that one or perhaps just a few persons can derail an event that took months to plan, and deny entertainment to a large number of paying attendees, based on currently very subjective “noise” regulations. A proposed more objective standard is being worked on for City Council, but key to its implementation will be correctly identifying or perhaps redefining areas as residential, mixed use, or entertainment.

So speaking of  which, the meeting with Councillor Mary Margaret McMahon took place this past Friday. Rob Greenway and I presented our concerns, and the councillor seemed genuinely interested in what we had to present. The short version, as already mentioned in a few posts here, is that clubs and musicians who play in them are the foundational elements of a city’s musical ecosystem. If they don’t prosper, eventually the entire structure will collapse. It’s like minor leagues for pro sports. Rob was indispensable in presenting the professional’s point of view, and a huge thanks goes out to him for taking the time to be there and steeping himself in the issues. We left a list of recommendations with MMM (see below) and she assured us that she would bring this to  the attention of  the Toronto Music Advisory Council (TMAC). We’ll see…

Other Out and About 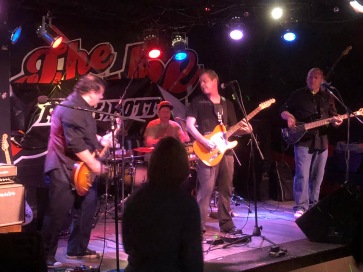 I also was able to catch a few sets on Saturday night by cover band Rockbottom at the Duke Tavern on Queen Street. The event was a fundraiser for Cambodia, and a great opportunity to hear new FatC drummer Chris Bender playing in a different context. I’d already heard him many times with the Fraz Milne Electrical Band, so I knew him as capable and attentive to the intricate changes that Fraz’s songs call for. With this show, I now saw how adaptable he is as well. Our first show with Chris is March 24 at the Amsterdam, then April 7 at the Black Swan. I also had a nice chat with the Duke’s owner, who provided some interesting insight into the challenges of maintaining a music-friendly venue. It would be great fun to play the Duke, but that decision is ultimately the club’s. I will persevere.

Last night, I made the drive to Ajax (another benefit of having a car) to catch vocal coach Jaclyn Serre‘s premiere at the Edge Lounge with Heart tribute band Crazy on Heart.

I had also gone there with the idea of maybe playing the open mic, hosted by Ayden Jacobs (talented son of former Stir-It-Up-Sunday host Phil Jacobs), but it became evident early on that the context, although nowhere nearly as surreal as the one that led to the song Dancing With the Dinosaurs, would not be conducive to original songs.

The night ended with a short visit to Relish to wish troubadour Jody Ferrer (ABC Songwriters’ Circle #6) Happy 700th Stage, and astounding accomplishment! The joint was jumping’ as they say, with what it seemed every artist who had played at Winterfolk there for one more trio of tunes. The list was sooo long, I had to pass, with regret.

Please check out the bios of my upcoming guests Just Jillian, Jeff Orson and Carmen Toth, who will be my guests tomorrow, February 20, 2018 for the 15th iteration of the ABC Songwriters’ Circle at the Amsterdam Bicycle Club. Show starts at 9!

I always had the impression that my upbringing was not particularly musical. My father Pierre played a little harmonica which he used to do only occasionally when I was very young, but drifted away from in later years. It wasn’t until I turned 13 that I picked up the guitar, which my parents had bought not for me, but for my younger sister Manon. She got bored with it so I took it up. By the time I was 17, I was in my first band.

Just recently, my cousin Marie Claire reposted a picture of her family from the 70s, and it reminded me of the trips we would take every year from Northern Ontario to the north end (my maman’s family) and the south end (my papa’s family) of Québec to visit the relatives.

Now keep in mind that my father is from a family of 12 (plus one child who died at a young age). That made for a lot of people to see.

One of my favourites was the family of my uncle Georges and my aunt Georgette, who lived in the lovely and somewhat isolated community of Saint-Benoit-de-Packington, now simply Packington, QC. My uncle and aunt were both musicians, he played the harmonica, she the fiddle, and every year, a visit there would feature a soirée canadienne, the equivalent of a kitchen party for the Atlantic-Canadians out there. I loved those evenings, all the instruments around, and the excitement it generated. The most extraordinary fact was that Georges and Georgette produced 17 children, most of whom also took to music as a hobby and also performed. This is a picture of that family from the 70s below.

My aunt’s brother, Georges Saint-Pierre and his wife Georgette (no points for originality here) would always be present too. The Saint-Pierres played banjo and guitar respectively. I still have permanently etched in my brain an image of Georgette with a cigarette dangling from a very red-lipsticked mouth whipping a slide steel up and down the neck of a very cheap, high-strung Japanese electric guitar.

One year, they decided to do this at a small local spot called Lac Jerry and I think my dad took the photo below of my sister and me below with George S.P. 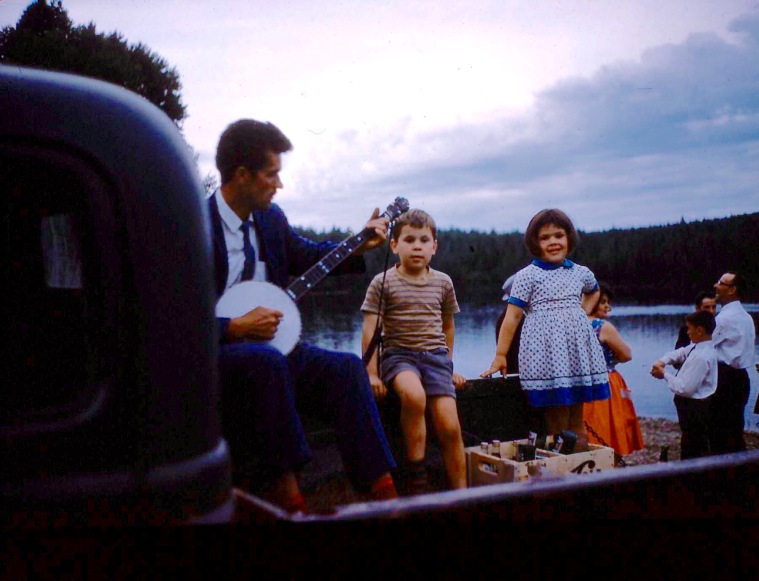 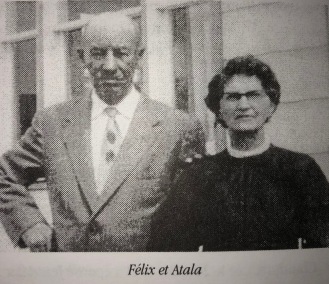 Now, anyone who follows this blog knows I use the stage name Félix, which is actuality my middle name (this came about due to having 3 Roberts in one band back in the 80s). I have always known that name was given to me as a traditional reference to my paternal grandfather, pictured on the right with my mémère Atala. According to my father, he was a decent fiddler himself, although I only have a dim recollection of seeing him play.

What came as a surprise was through Marie Claire tagging the photo of her family, and including my uncle Georges’ middle name, which turned out to be Félix as well!

Perhaps that is an explanation for my life-long love of music, and to a connection to tradition that goes back much further than I had thought. I will choose to believe that!

It’s this coming Friday I meet with City Councillor Mary-Margaret McMahon to discuss the Toronto Music Advisory Council, and my concerns therein. The media have not been kind to TMAC over the last while, first in NOW magazine this past June, then in Toronto Moon just this week, for many of the same reasons I am meeting the Councillor. I will for sure report back in next week’s blog.

This Tuesday, I welcome Andre Dantas, David McLachlan and Eric Sorenson to the song circle. Show starts at 9 at the Amsterdam Bicycle Club. For more information on my guests, you can go to the the Songwriters’ Circle page here.

The weather forecast is calling for a warming trend by mid-week. What better way to celebrate than joining us at the ABC?

Until then, be well, as usual!

A fair amount of time this week has gone to mixing a project in ManCave Studio, and preparations for my upcoming meeting with the City to talk about the Toronto Music Advisory Council and the city’s engagement to better live music in its midst, io this one will be short.

Only got out once mid week to check out another songwriters’ circle, this time at the Painted Lady, a lovely bar on Ossington in the west end. Run by the talented Gillian Nicola, it runs in many ways like my Tuesday show at the ABC, other than being monthly, rather than weekly. Former song circle guest and honorary Cat David Macmicheal was on the bill, along with Simeon Ross and Darling Cora. It was a great show and heartening to see so many artists in the city getting a chance to feature their work in a supportive environment, and I’m very lucky to be able to help.

The demos page just got a much needed tidying up, with all the songs posted included, and now sorted alphabetically. Twenty-two tunes are available for your listening pleasure. 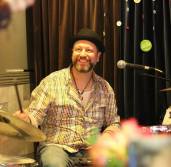 Full FatC fun is coming this spring, with two shows (and potentially more) added to the calendar! The first is back at the Amsterdam Bicycle Club for a Saturday evening show on March 24, and a long-overdue return to the Black Swan on April 7. Add those dates to your calendar as I’ll be introducing new songs and the Cats’ newest addition, drummer Chris Bender, who also regularly performs with good friend Fraz Milne.

…but do try to get out to catch some live entertainment, despite the weather. This week’s ABC Songwriters’ Circle has a very interesting mix of players, ranging from acoustified metal shredding to country by way of soulful punk (yes!).

Be there and be well!