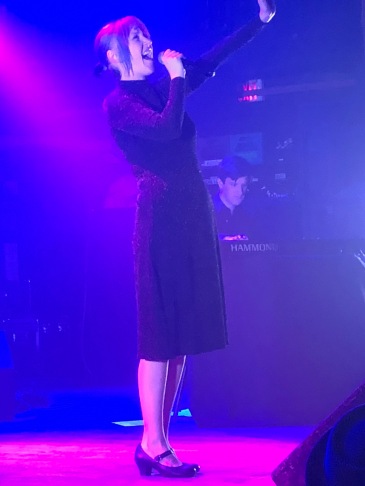 At least, that’s what her website, t-shirts and buttons say. I had the pleasure of catching Chloé Watkinson‘s new show at the Opera House last night. She pulled out all the stops and delivered a solid set with energy, grace and style. I had seen her before (and written about it) when she was in Park Eddy but this new incarnation raises her stagecraft to a whole new level. I was also glad to see that keyboardist extraordinaire and family friend Alan Zemaitis is still with her from that band. I was thrilled to have Alan also play for me at a major birthday bash a few years ago. It was also thrilling to see her dad, Max Webster alumnus and artist Terry Watkinson, play and sing with her last night. Chloé is a major talent, and you will hear more about her in the future, I am sure. For my part, I am very thrilled to say she will be my guest for the ABC Songwriters’ Circle, along with Augusta Ray and Lucy Dee on February 6. Expect an amazing evening!

And Speaking of Which

The new year kicked off spectacularly with my first song circle of 2018, featuring Kevin Foster, David Storey and David Madras (pictured below to my left). Every one of these songwriters blew me away with their talent. A special recognition though must be given to David Madras who was feeling poorly that morning but rallied and made it to the show!

This week, the song circle will plumb the depths as it will be a one-of-a-kind, “It’s all about the bass” show. We will hit hit rock-bottom as we feature singer/songwriters performing their tunes with only a bass guitar. How low can we go? Come down this Tuesday to find out. My guests’ bios are on the song circle page.

It was a great surprise and pleasure to discover last Tuesday as I was setting up for the song circle this very kind review by Gary 17 in Toronto Moon (which I have mentioned in the past here. I’ve linked it to the original, which will be larger and therefore more legible. 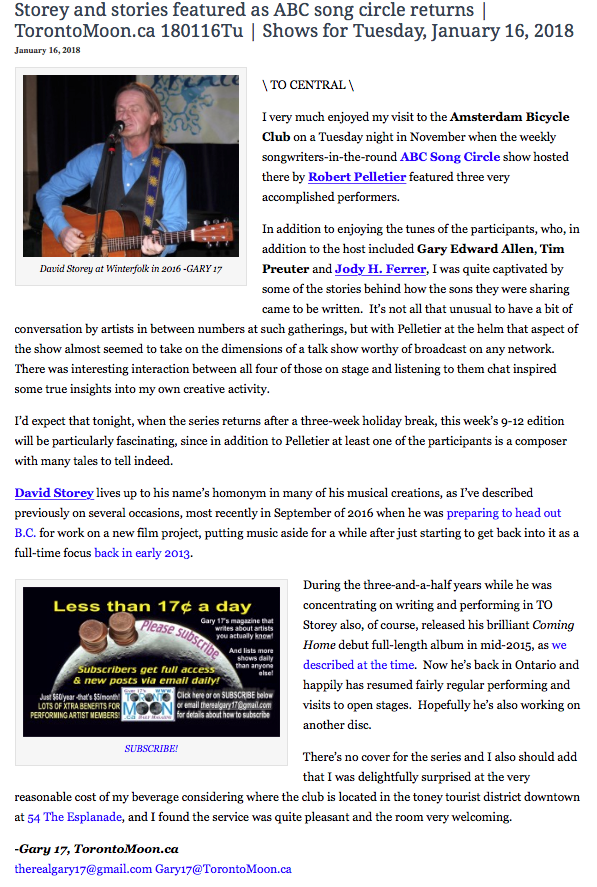 I hope to see many of you at the Big Bass Bash at the Amsterdam this Tuesday.