“O Oysters,” said the Carpenter,
“You’ve had a pleasant run!
Shall we be trotting home again?’
But answer came there none–
And this was scarcely odd, because
They’d eaten every one.

Lewis Carroll (from Through the Looking-Glass and What Alice Found There, 1872)

Curiouser and curiouser. That seems to summarize the past week. Many intentions were stated, but some did not come to pass, for good and sometimes unpleasant reasons. With expat daughter and boyfriend visiting, sightseeing became the priority (more on that later), and by the time Thursday rolled around, the aforementioned open mic escapade at Ma Bakers was one-too-much activity for the day. Hoping for this week instead.

Recording of the new song has gone well so far but I have now encountered the 8-track limit of my old iPad Mini. It’s bouncing time now. Mostly though, a batch of bad oysters (we presume, but likely since 3 of 4 of us ate them and the same 3 ended up sick) had us waylaid for a couple of days. A completed recording looks promising for next week’s post. Please check back! 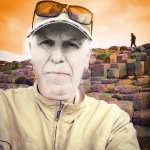 Despite some hangups, we were able to get to one of the great natural wonders of the world, the Giant’s Causeway in Northern Ireland. My somewhat somber tribute to that inspiring location (i.e., Star Trek the Motion Picture) is on the right (or below on mobile). Classic rock fans should get it, and might be interested in the backstory. Worth the read.

Time to go finish recording that new song now. Until next week, be well!