We will be going back in time in the episode, in two ways.

First, I will be talking about the week that passed, but beginning with Friday, then Thursday. The second reference to the past will be in the content of the first part. Please consult your lawyer for explanation.

This past Friday, as promised in the last blog, I went to hear Circle 5 with Hermina George at Dora Keogh. The band delivers beat-infectious reggae originals and covers, and a full house enjoyed a great set.

The connection to Hermina goes back a few years, as her son was a student at the school where I work. When I found out she was a singer, I recruited her to front a couple of teacher/parent bands we put together for school fundraisers, once with NeMo on bass, and more recently and notably in a big R&B band with a 4-piece horn section made up of students from a nearby high school. It was one of the most memorable shows I’ve ever done, and Hermina really delivered. 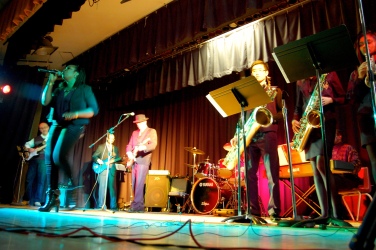 But the connection gets even more complex as I recently discovered. Fergus Hambleton, Hermina’s guitarist and collaborator also works with singer, writer, and keyboardist Julie Long, a frequent performer at Relish Bar and Grill, my home away from home for all things musical. She also happen to be the daughter of Jack Long founder of Long and McQuade, and brother of Steve at Yorkville Sound, both for whom I worked for nearly a decade in the 80s.

Never mind six degrees of separation, this is maybe 3 at most! The music scene in Toronto is a very tight-knit group, and an overwhelmingly great group of people.

Taking one more step back, Thursday past was the first ever open mic at Legends, hosted by Gary Edward Allen. I managed to convince Leanna Yamada to come down for the inauguration and, with some coaxing, she delivered a few of her not-often-played originals for a well-received set.

A little after my set, the awesome Tyler Ellis showed up and invited me to sit in, which is always great fun. That evening though, we were joined on flute by Doriann Forrester, a Juno-nominated musician who showed us just why that was the case. It made for an impressive first night. Thanks to Gary for spearheading this, to all the other performers for your excellent performances and encouragement, and to owner Nick Papalambropoulos for supporting live music in Toronto. Yes, I am available for a gig in June (and onward)… just sayin’!