Every so often, a subject for this blog luckily falls in my lap. This is the case this week.

Isolation has meant that I’ve had to learn to work physically distanced from the rest of the band, so we have worked out technological solutions, including all of us set up for home recording. By sending each other files, we can play along to previously recorded bits and then sum them up for a finished product.

Good friend and Relish regular Dan Boggs wrote a pandemic ode, and recorded it solo on his computer (phone?). When I saw it, I could not resist the idea of fleshing it out with a full band arrangement. 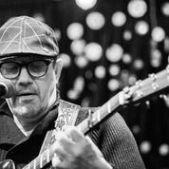 But first, a few words about Dan.

Dan Boggs has performed many, many times at Relish (and probably other places too, but that’s where I know him from). His songwriting is original in the truest sense of the word, with subject matter often out-there (surgical anaesthetic?), and clever crafting of the lyrics. His latest is called Bunker Town and speaks to the isolation we all feel. I have included a before and after for your enjoyment. On the full band version, Chris Bender plays drums and piano, Neil Morris plays bass, and I added the electric guitars, then mixed the whole thing. It was a lot of fun to do.

There is a rumour that a compilation of locally written pandemic anthems may surface in the future. This song should certainly be part of that.

Be safe and be well!