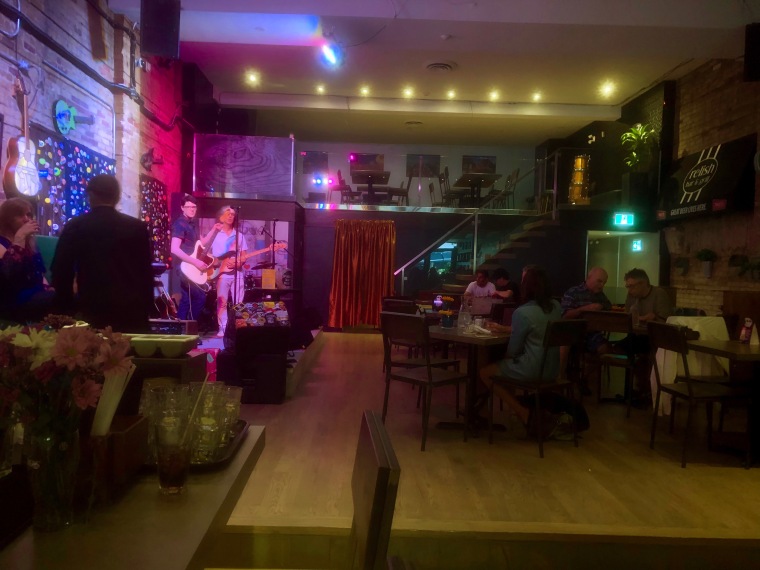 Relish 2.0 opened its doors last Saturday to an enthusiastic and plentiful crowd. The place was humming and, judging from the non-stop activity by staff, it seems business was very brisk. The location is prime, with plenty of regulars there and many walk-in patrons.

The first (ever) band up at 7 was the $6 Tall Boys, with frontman David Macmichael also celebrating a birthday. I’ve heard David, Jace Traz and Arch Rockefeller many times before, always enjoying it, but there was a unique energy to it that night, and special appearances by Chelsea Reed and Dean McKinnon for an extra bit of special. The sound was vastly different from the old Relish due to significantly larger dimensions in all directions, and masterfully mixed by Rick Henry. The space is impressive yet still comfortable and welcoming, with lots of decor elements from the old venue to make regulars feel at home.

The food menu included all my favourites, some of which I sampled, promptly served. All in all, it felt like the place had been running for weeks, rather than just a few hours. Kudos to Joanne Clayton and the entire staff who have obviously invested themselves fully into making it the best transition it could be.

I plan to be back this Sunday for my first Stir It Up at the new location (I was away for the actual inaugural) and expect to report on that shortly after.